It would be difficult to describe the feeling that overcomes you as you stand in front of Arlington. This feeling is only trumped by the next one that overcomes you as you enter the hollow shell of a mansion from another era. But through 200 years, this place has seen a lot and been through even more- and you can definitely tell. Embroiled in a tenuous battle between private owner and the city where it sits, the future of this historic site is very much in jeopardy.

Arlington: The Belle of Natchez

This land where Arlington sits was purchased by Lewis Evans, a wealthy plantation owner in 1806. At that time, Natchez was already a thriving river town that had been founded in 1716 by French colonists.

It grew quickly to prominence because of its location on the busy Mississippi River. This would explode even more with the invention of the cotton gin (1793), steamships(18xx), and the subsequent growth of the Southern cotton industry. In fact, by 1860 Natchez had more millionaires per capita than New York City.

The records are somewhat contradictory about what happened on this land next, leading to some confusion about when Arlington was actually built.

In 1814, a land speculator named Jonathan Thompson bought this land from Lewis Evans then in 1818, Thompson sold it to Mr. and Mrs. John & Jane White who were from Elizabethtown, NJ.

YOU CAN ALSO READ:   Historic Schoolhouse in Florida Sits Empty After Years of Service

By most accounts, Mr. John White (who designed the first bank building in Mississippi) is accredited with designing this home for his wife, Jane Surget White. While other accounts speculate that it was designed by architect Levi Weeks who also built Auburn and many other mansions nearby. And a final theory that this home was actually designed and built by Pierre Surget for his daughter Jane Surget (White).

However, an architectural survey in the 1970s surmised that portions of the house dated back to 1806. If this was true, it seems that the home might have actually be started by Lewis Evans and then perhaps expanded and improved upon later.

In any case, John & Jane White oversaw the final construction of the home on 55 wooded acres, but John would not get to see it finished as he passed away October 15, 1819 from yellow fever. When the home was completed in 1820, Mrs. White had an opening party for friends and family. 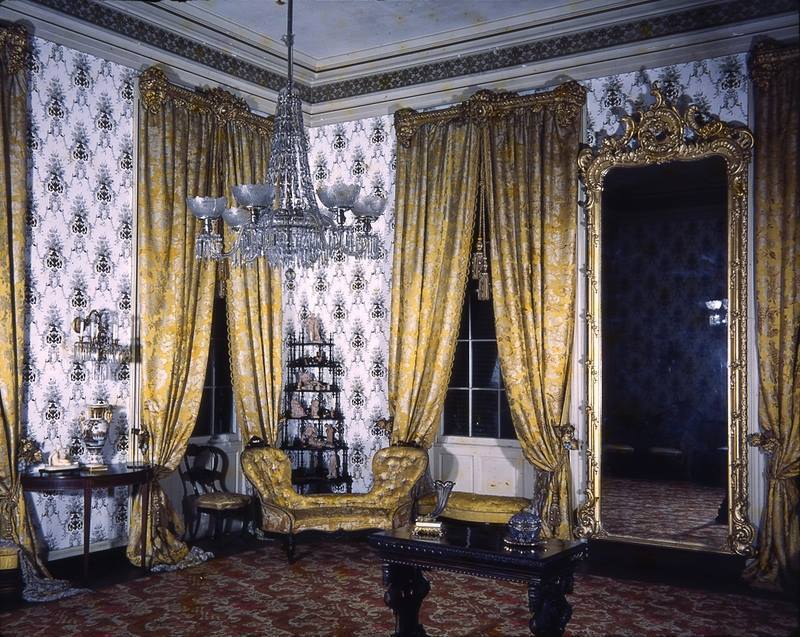 She died mysteriously the next day. The couple are both buried in Adams County and had no children. Arlington and all its antiques and furnishings were then passed to Jane’s sister, Mrs. Bingaman. Then passed to Judge Samuel Stillman Boyd, a rising lawyer from Cincinnati and his wife. It reportedly sat empty for sometime before coming under the ownership of Mrs. L.S. Gillette from 1917-1924.

Sometime after Mrs. Gillette, a widower named Hurbert Francis Barnum bought Arlington with many of its original furnishings still inside. Soon, he met his neighbor, Annie Shotwell Green Gwin, the owner of Monmouth and a widow with 3 young children. In a short period of time, he proposed to Annie and offered Arlington as a wedding gift to her. She moved from Monmouth next door with her 3 children. Mr. Barnum died in 1937 (or ‘39), leaving the house to his wife Annie who would continue the long traditions of Arlington. 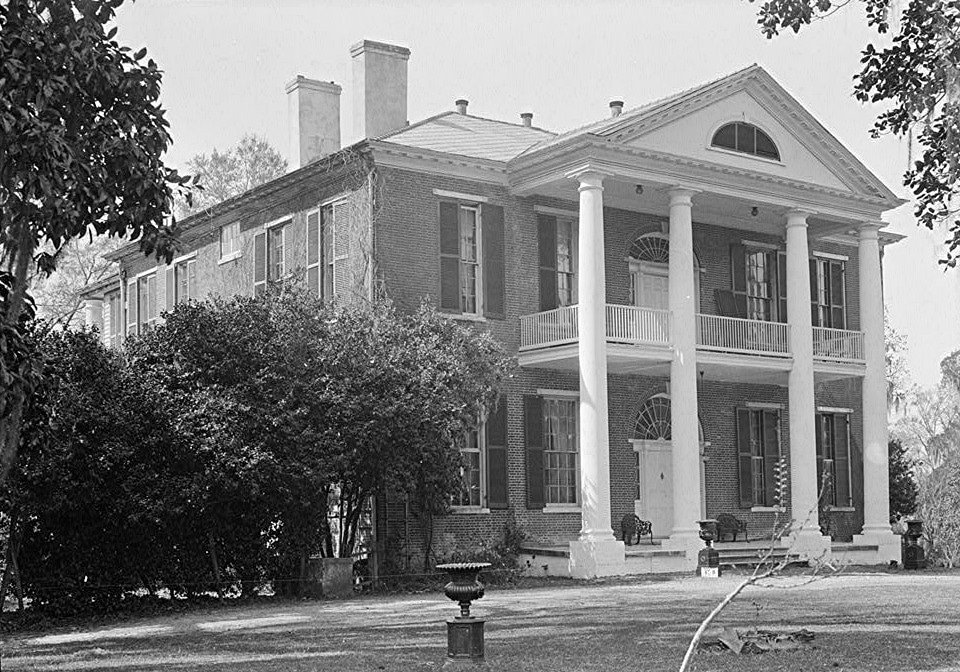 When Annie passed away, her daughter Anne Gwin Vaughan was the next to inherit along with her husband Jack Chapline Vaughan.

They had at least three children in this home, Anne, Thomas, (its current owner), and Gwin.

Sadly, in 1945 at one year old, Gwin died from an accident that occurred at Arlington.

As recently as the 1970’s the home was still in great shape- boasting a beautiful garden of azaleas, magnolia trees and moss-laden Live Oaks- some of which are registered with the National Live Oak Society. It still had a 300 year old piano, art from around the world, thousands of books-many of them first editions, chandeliers, fine china, and more. In 1973, it was added to the National Register of Historic Places and in 1974, it was designated a National Historic Landmark.

But according to accounts from locals, it had fallen into disrepair by the 1990s, after Anne & Jack Vaughan passed away. There were reportedly plans and efforts underway to repair the home but in September of 2002, the home was nearly consumed by fire that started upstairs, reportedly from an electrical fire that started with a faulty extension cord in the attic.

The roof was completely destroyed as well as much of the interior of the home. At the time, many of the fine furnishings, books, and art were still in the home-mostly in the attic where the fire started. There are stories that the Smithsonian intended to visit the home to acquire some of the books and art before the fire, but it isn’t clear if they ever made it.

Although the roof was replaced, most of the rest of Arlington remained in ruin with fire damage to mantels, walls, doorways, and floors. The home was open and unmonitored as well which led to vandals and thieves making their way with this home. Today, nearly all of the finishes, detail work, and any wood that could be removed has been. A home that was once decorated with the finest art from around the world is now a shell adorned with obscene graffiti and littered with trash and signs of vagrancy. The front porch railings are missing and the two-story back porch has collapsed completely. Every window and door is gone. 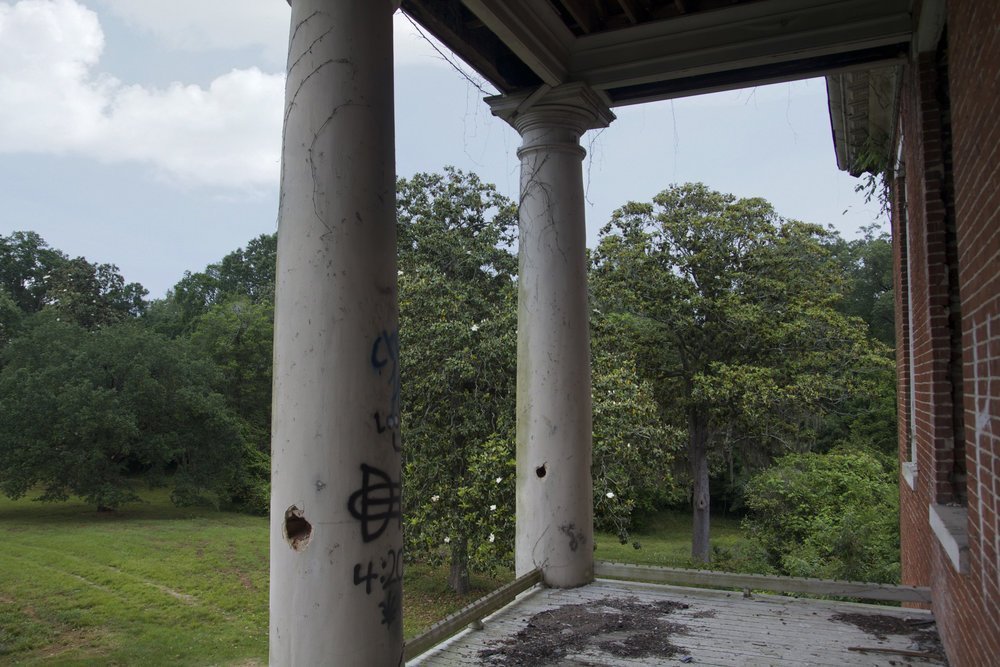 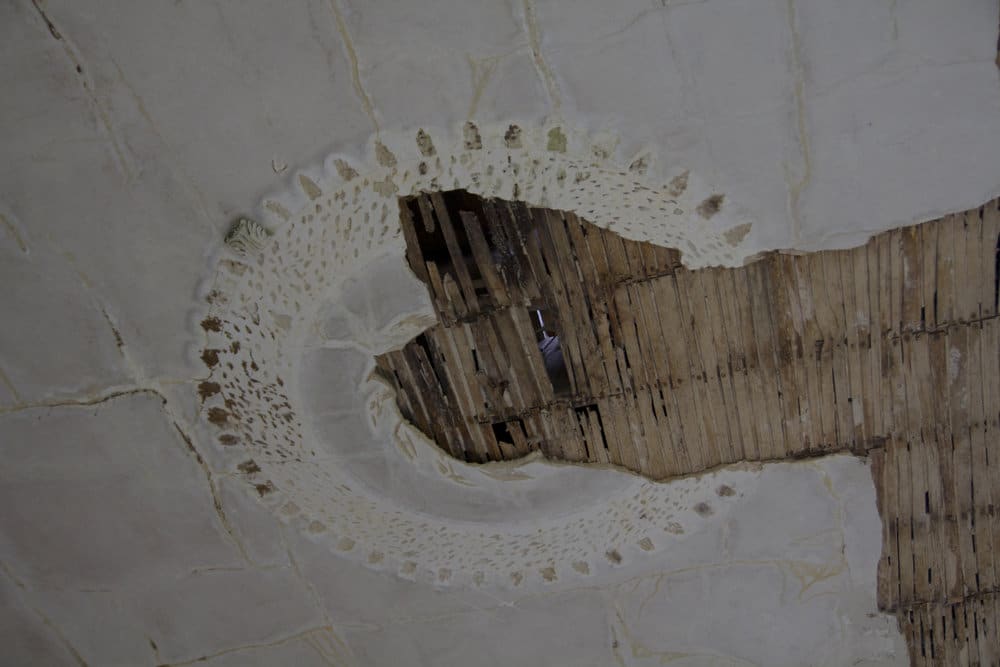 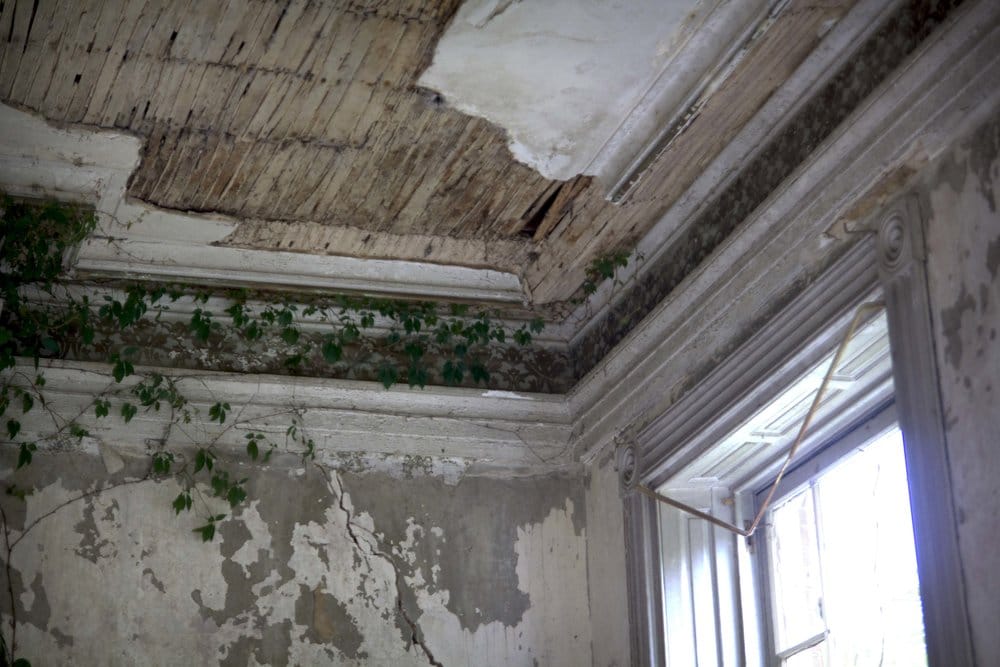 The owner has been taken to court on numerous occasions and levied with huge fines to do something about the home, but the allegations and distrust have been bred so deep, that Dr. Vaughan and the city seem to be doomed to an eternal gridlock. He has been charged with demolition by neglect, however, because the home is his private property, it has been difficult to compel him to act. A small victory came when arrangements were made for monthly lawn maintenance here so as not to be an eyesore to the community.

To add to the troubles, insuring Arlington is a huge hoop that any potential buyer would have to be ready to face. After all-how do you insure something that is literally irreplaceable? Alas, I’m getting way too far ahead, as he refuses to sell the home to interested buyers so only time will tell how soon we might lose her altogether. 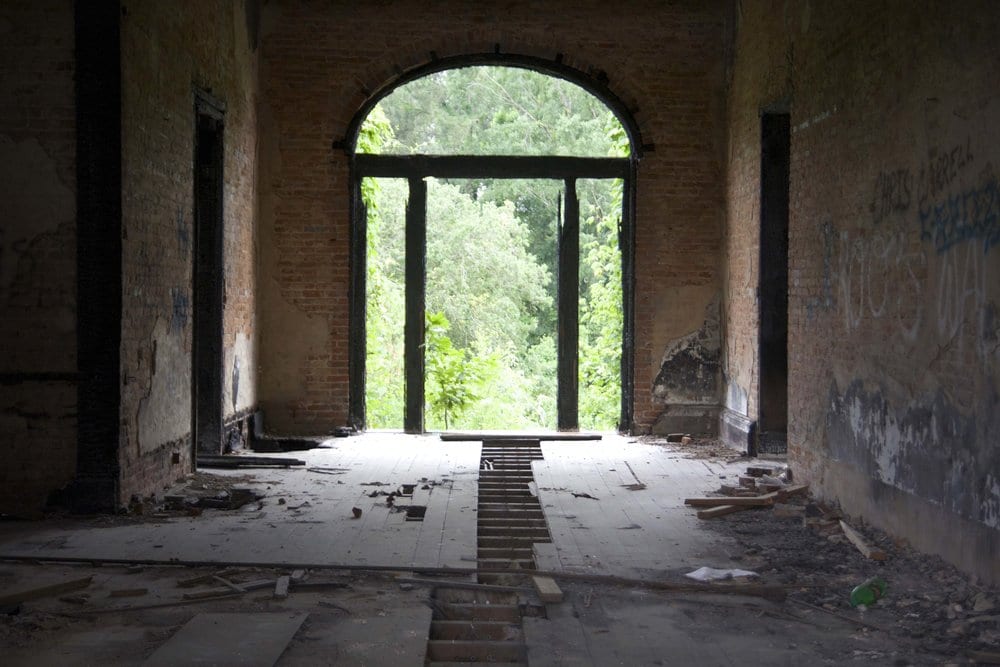 A Grand Southern Home in its Prime 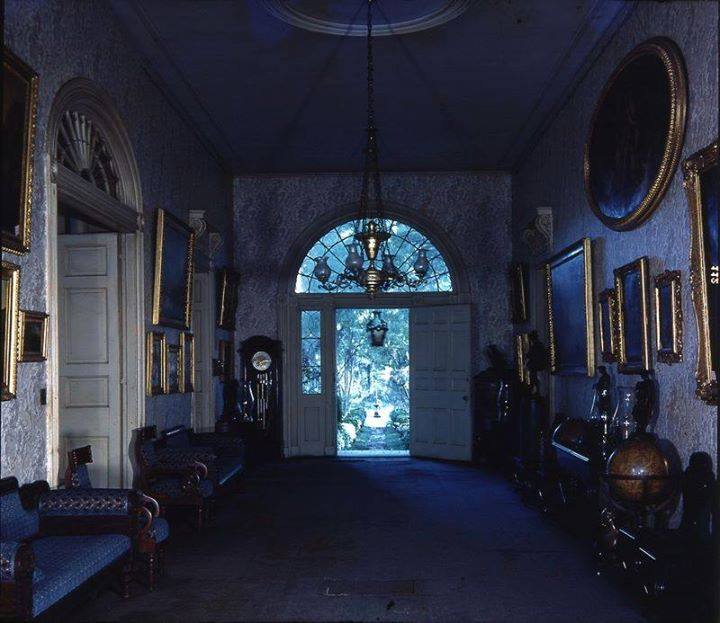 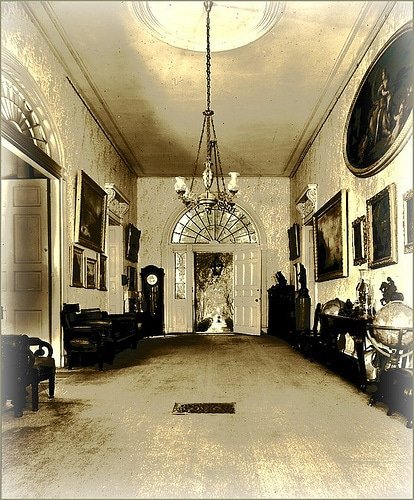 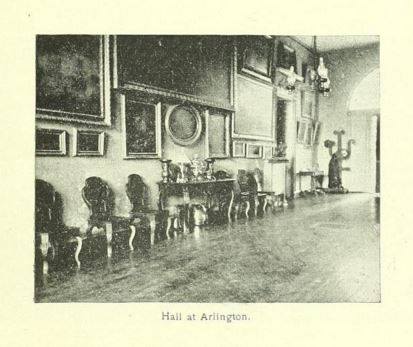 Many things were passed from owner to owner, creating an irreplaceable collection that spanned the globe and many eras.

The incredible collection that once resided in this home began with the antiques, art, furnishings, and literature of the Surget Family. They were wealthy French immigrants who acquired most of their collectibles from Europe, including a piano that was 300 years old and still here in the 1970s.

Later owners, Judge S.S. Boyd and Mrs. Annie Barnum  reportedly had an incredible collection of rare books as well, many of which were first editions.

A Palace Now in Shambles 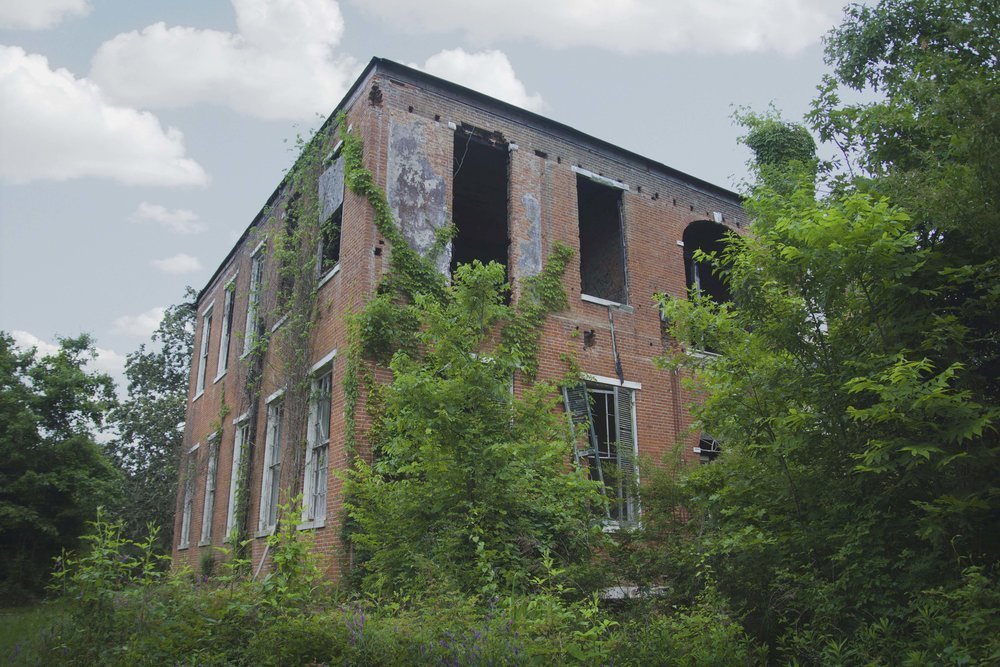 Rearview of Arlington c. 1930s and in 2015. You will notice that the entire rear two-story porch, including its columns, have collapsed. 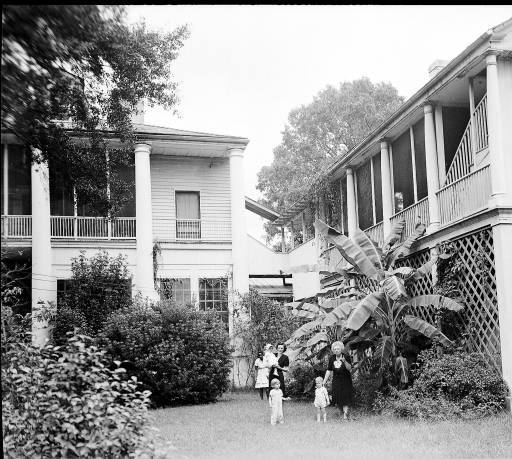 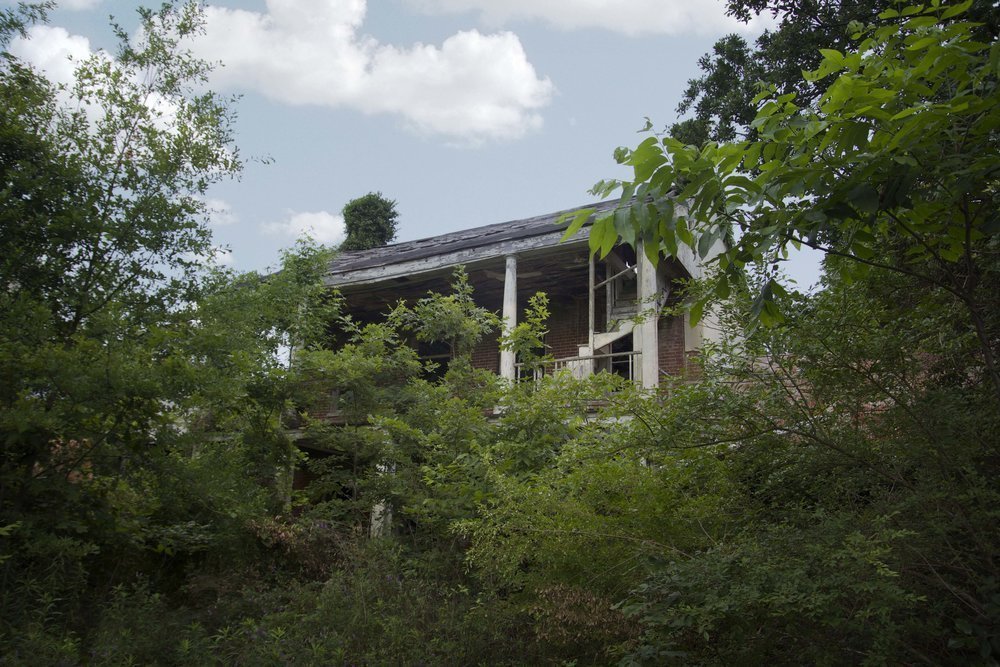 Another view of the rear of Arlington and its backyard, circa 1940s or 50s and as it looked overgrown in 2015. 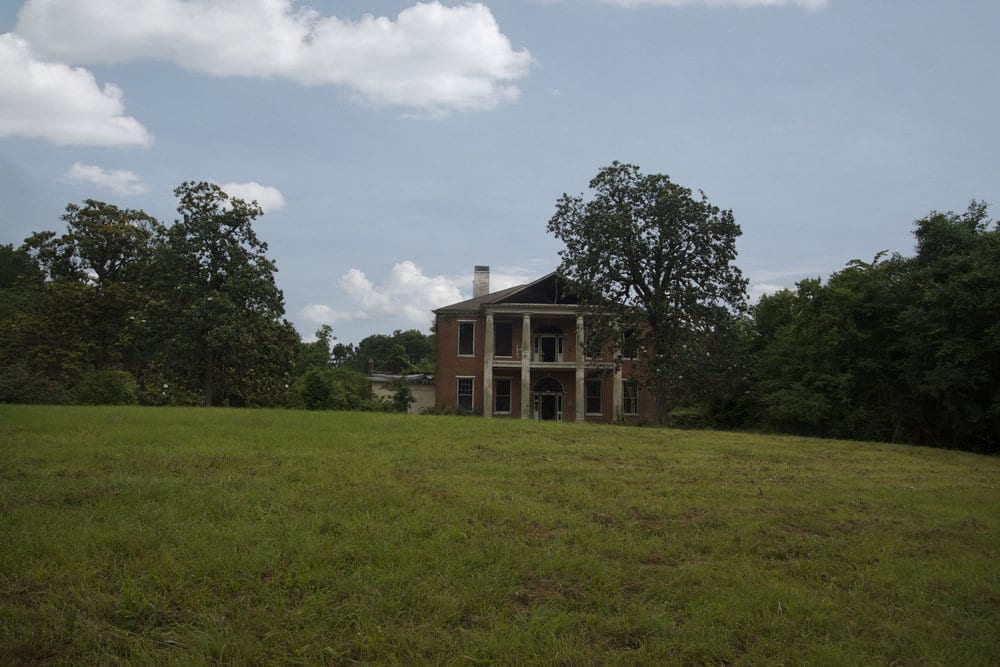 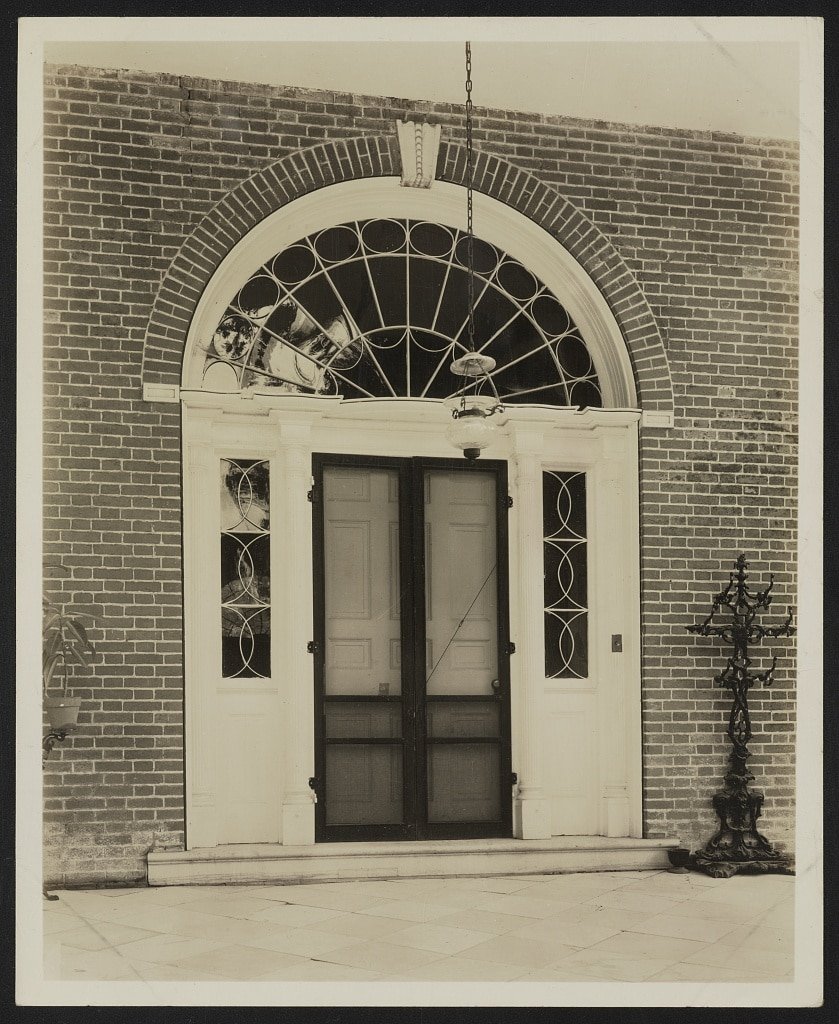 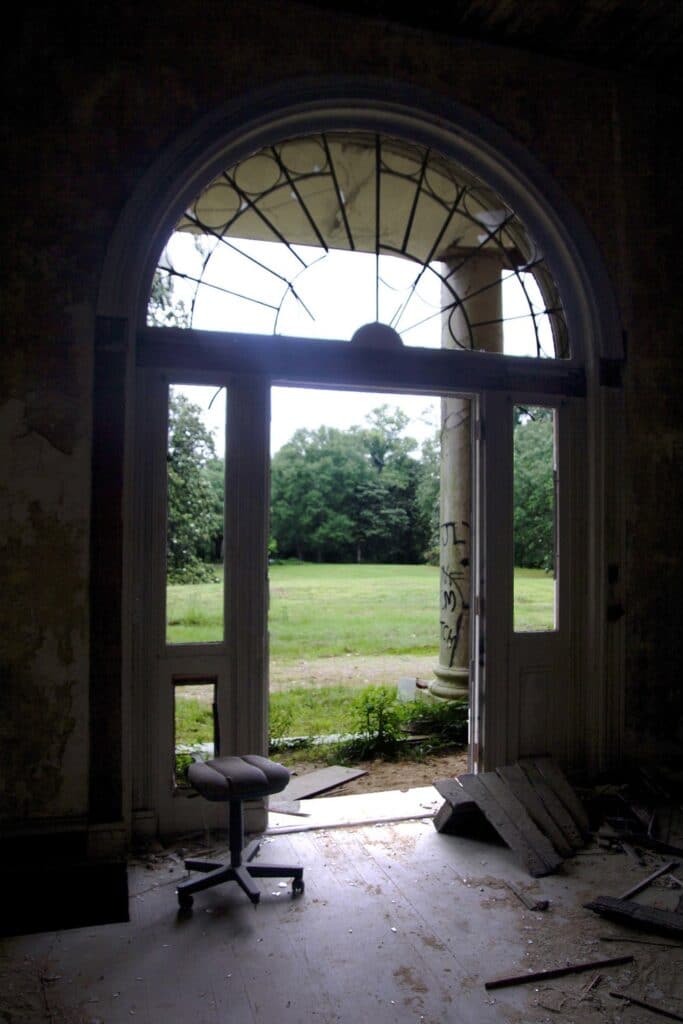 The entry was once described as: “The great carved entrance door leading to the spacious hall is crowned with intricately wrought fanlights, and the broad veranda is approached by wide steps of concrete.” 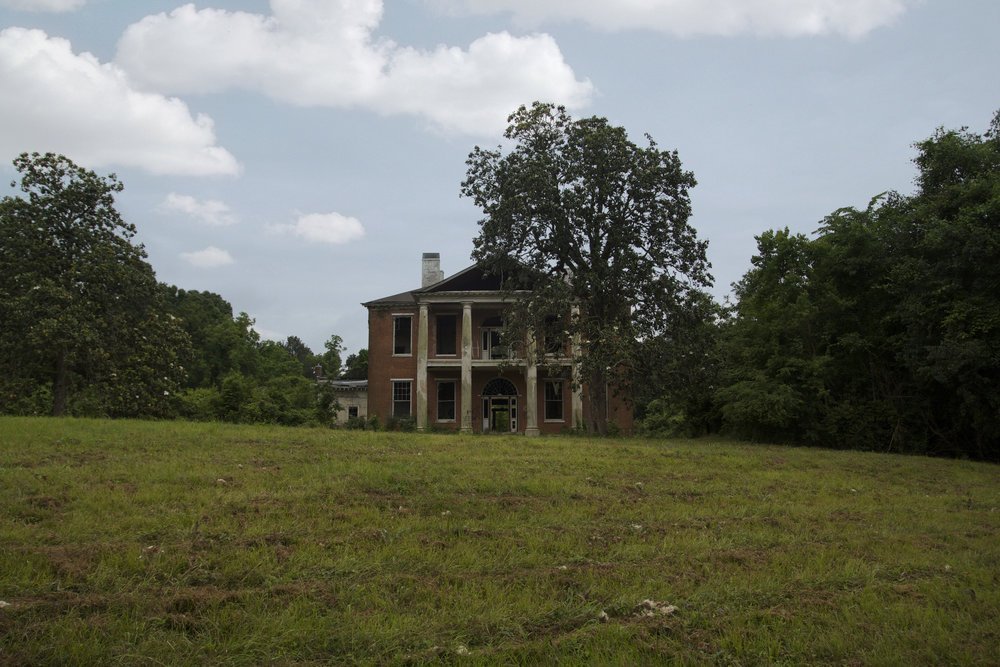 Imagine a carriage that approaches on the long drive to the magnificent entrance of this home. Mrs. Jane White climbs from her surrey in a fine custom dress and bonnet. She pauses to admire the American palace that she now calls home. As her wide hoop skirt brushes the doorway, she steps into the grand central hall adorned with art work and antiques that have been gathered from across the world. 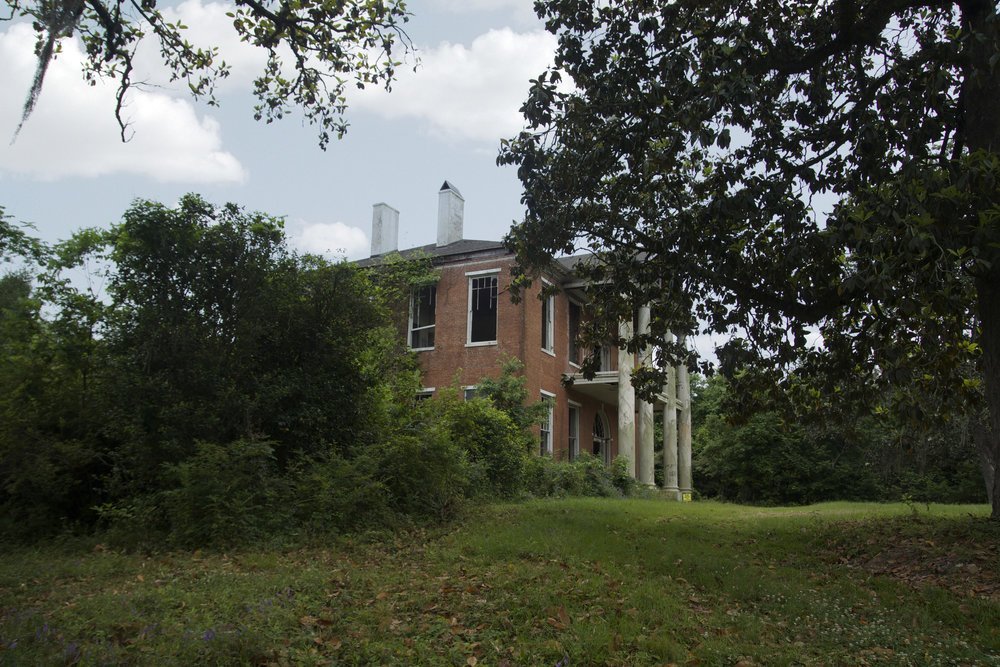 As she passes through the hall she marvels at the collection and grins in gracious acknowledgement. Moments later, her first guests are announced- the time has come to open her home to showcase her standing in Southern society.

The finest h’ors d’oeuvers are served, fine wines from Europe are imbibed, music fills the rooms, and the upper crust of Mississippi Plantation Society saunters from room to room, admiring the marvel that was erected here.

A great evening is had by all and at nights close, she bids her guests adieu and heads up the grand central staircase. She climbs into her bed and lays her head upon fine silk sheets. As she takes stock of the evenings success, she passes into sleep. Mrs. White would never wake up.

This narrative, while slightly embellished, is the generally-accepted account of Mrs. White’s last night in Arlington and her last night on this earth. I think of this story often and of that night in her home.

I recall the bedrooms I stood in and know that one of them was the room. How bizarre that almost 200 years later, her home still stands here and here I find myself, pondering her life in the very room she took her last breath.

In many ways, it feels intrusive to be in such a heavy place, but on the other hand, the story is important and deserves to be brought to light. I hope you’ve enjoyed it as much as I did. 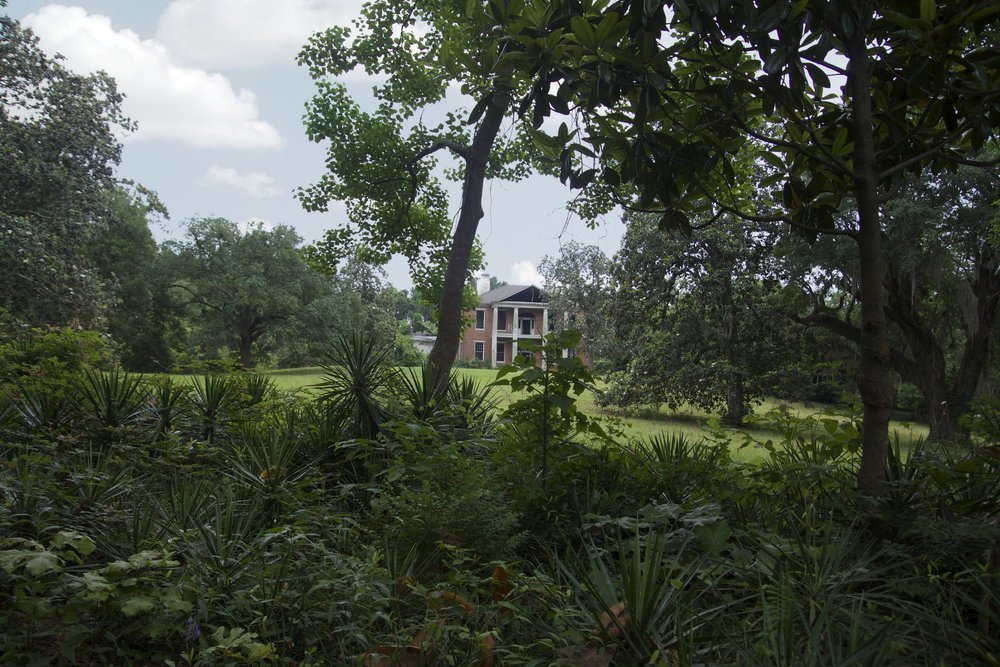 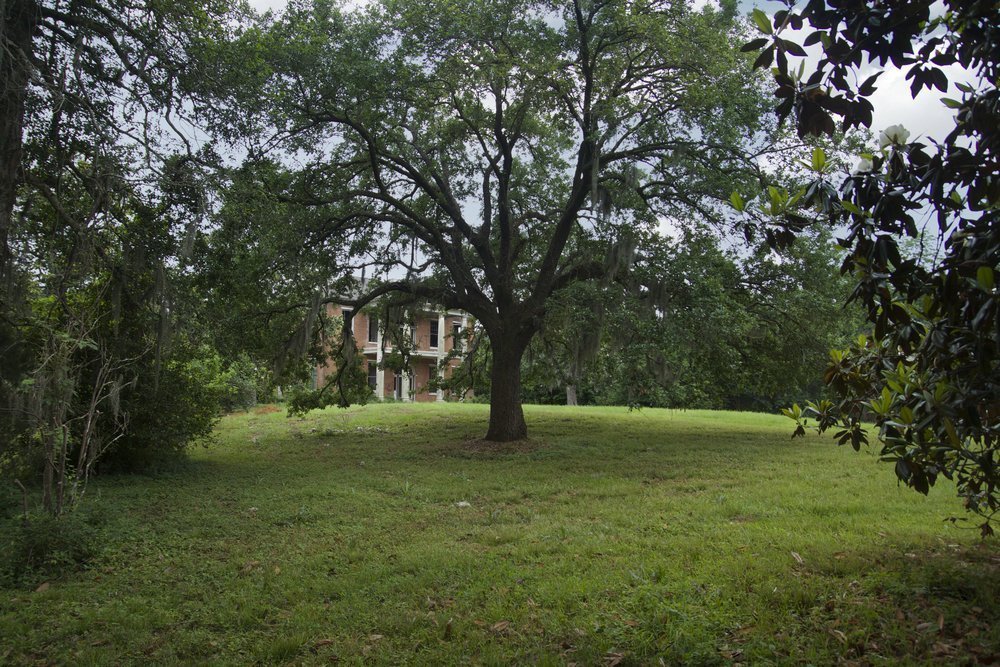 Arlington in the News 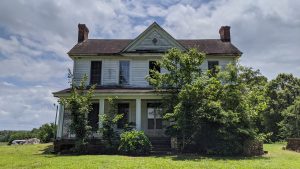 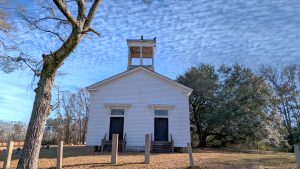 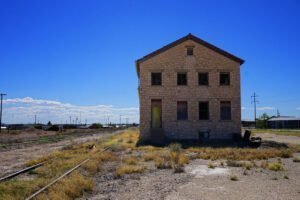 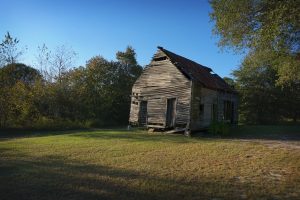 17 thoughts on “National Register Home in Mississippi Left to Crumble”